A Place For Wood Oven Lovers to Gather

There are countless reasons to eat organic food. It's the best choice to improve your health and the health of the atmosphere. So why doesn't everyone go organic? There is a higher cost along with organic food. It costs more to produce food naturally as well as that's cost is given to the consumer. There are, however, some things that you can do in order to make the switch the signal from organic less not cheap.

Your garlic is approaching harvest time when what…

I just fired up the oven. The outside walls registered 14 degrees F. The fire inside is going well. We should be making pizza for lunch, blank flat breads for the freezer, Pane Francese, stuffed breads and roast loin of pork with roasted potatoes, cauliflower, and string beans for dinner.

My wife and I just came back from a class at the Stone Turtle Cooking School. http://www.stoneturtlebaking.com/ Mike and Sandy have a beautiful wood fired oven and hold classes that teach creative ways of using it in a fully equipped kitchen classroom building. The class we took was on making pie crusts, pies, tarts, and gallettes. We have spent years trying to perfect making pie crusts and shells for baking. I think that we now can do that. If you ever get a chance to take a class there we… Continue My neighbor just had an 80ft pecan tree fall........ on his boat! The boat is under it, but it looks like the only part hit was on the engine cowl. Where it hit let the trailer tongue pivot up, so it may have not done much damage.
I'm hoping I can get the wood. Since no one on our street has a fireplace.... just me and my oven, I'm hoping I can get at least some. His dad will be coming over to start clearing the tree away to get the boat out from…

I created a monster!

I gave my neighbor some of my homemade pita breads. NOW.... he is being a PITA (Pain In The A$$) wanting to know when I'm baking more. I'll be posting my recipe. 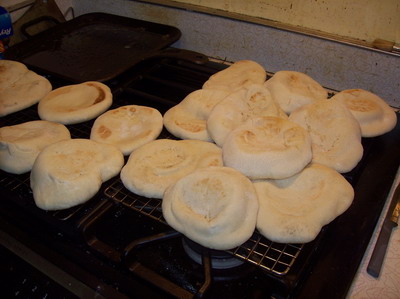 I'm making pita bread today. I do it on my gas grill though. I've done them in the brick oven before, but I need to restock my firewood supply and it is easier on the grill.

I've been needing to rebuild my mailbox at the street for years. I started laying some block for it yesterday. Julie suggested building it to look like our brick oven.

Yesterday was our 30th wedding anniversary. Time flies! The day we got married it was snowing like crazy and I had a lot more hair back then. Our oldest son, Jason, took this picture of us yesterday while the 4 of us were on a picnic.

Not oven related, but here's a funny. Molly, our Jack Russell/Chihuahua mix dog is plug and play ready. I the past month she has chewed up a USB mouse, 2 bluetooth headsets and now a 4 gig flashdrive. Where do I plug in the VGA monitor?

One good thing about being laid off

This will give me time to play with the oven and test recipes. I've got a "no knead" sourdough bread recipe I've been playing with to test in the oven. I also need to do some work at my parent's house. Dad has Alzheimer's and it's progressing. We borrowed his car last week. He's telling everyone someone stole it. He can tell you everything about making different radioisotopes that he has made when he worked at Oak Ridge, but he didn't remember his picture being taken 15 minutes later at the… Continue

Link to my other blog..'In Search of the Perfect Loaf'

Back on the roller coaster again!

I got laid off yesterday. Here we go again. Right after we poured the patio 4 years ago the same thing happened. Now, just as I was getting ready to add to my outdoor kitchen!

The Commandments of Perfect Pizza (reposted from Yahoo Food - March 12, 2009)

Ed Levine of the pizza blog Slice and food blog Serious Eats, has traveled around the world, studying the merits of a great pizza. While eating and loving pizza is a simple act, making a truly excellent one is not. How do you achieve that sacred balance of puffy, chewy crust with oozy cheese and an acidic tomato sauce sweetness? Behold the 6 Commandments of Great Pizza-Making.

Busy weekend with the oven

I fired the oven yesterday and today. I made some homemade mazzarella cheese today too. Someone in the group mentioned something about prebaking tthe crusts some. I gave that a try..... I like it! It makes it so much easier to slide the pizzas off the peel.

The weather if getting better. Should be near 70 this weekend. So I'm "preheating" the oven right now. I'll keep a small to medium fire going for a few hours and the crank up the heat and hour or so before we cook in it. My oldest son Jason (In the orange t-shirt on my cover photo) wants to have some friends over tomorrow evening. With the oven, I have a feeling we're going to be the regular hang out spot for free food! I can't complain, both the boys have a good group of… Continue

We poured the concrete cladding over the oven chamber Christmas day in 2007. If I remember, it was around 20, 80 pound bags of concrete. I used medium sized vermiculite as insulation and used 9 four cubic feet bags. The sides of the housing have about 5 to 6 inches of it from the cladding to the outside walls. The depth on top of the oven is a good 12 inches. If you look at my pictures, the insulation is poured even with the soffet line on the sides of the oven and mounded 2 or 3 inches deeper… Continue

A test of insulation and mass.

Saturday I fired the oven and at one point the ceiling was near 1200F degrees. Sunday morning when we woke up, we had about an inch of snow, even on the roof of the oven. I had not put the door in place either. Outside air temp was in the 20s. Inside the oven, the floor was about 190F and the ceiling was 310F. This was 14 hours after baking pizzas.

Welcome to
My Wood Oven